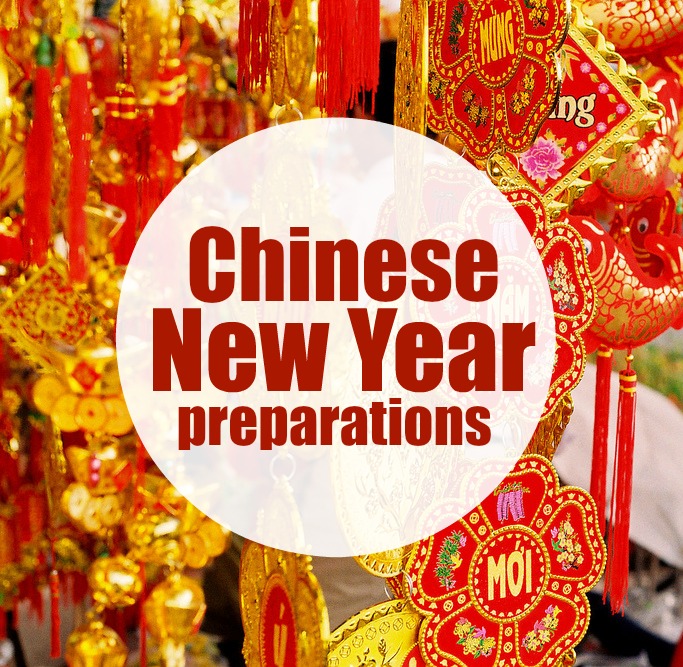 Chinese New Year is coming up on Tuesday, February 5th.2019 is the Year of the Pig.

In anticipation of Chinese New Year, here are some tips on how you can prepare.

Beginning on January 28 2019, Chinese people carry out a thorough ‘winter-cleaning’ of their houses. This is called "sweeping away the dust", and represents a wish to put away old things, bid farewell to the old year, and welcome in the New Year.

Chinese people may be thrifty most of the time, but they seem to spend generously during their traditional festivals. For example, they buy everyone new clothes for the festival, whether they need them or not. On the days leading up to the festival, there are many New Year’s street markets.

Although some people decorate their houses several days before the festival, most people do it on New Year's Eve. Houses are decorated with red lanterns and New Year’s paintings.

Puting up those decorations are thought to keep evil away and pray for blessing, longevity, health, and peace. 2019 is the Year of the Pig, so pig images will appear on decorations.

Offering sacrifices to ancestors shows respect. In addition, ancestral spirits are believed to protect their descendants and help them become prosperous.

Many worship on New Year's Eve, before the reunion dinner, to show that they are letting their ancestors "eat" first. Offerings of meat and wine are placed in front of the shrine/grave.

Big families including several generations sit at round tables and enjoy the food and time together. Dishes with lucky meanings must be included in the dinner such as fish, dumplings, niangao (sticky rice cake),and spring rolls.

Parents usually give their children red envelopes after the reunion dinner, wishing them health, growth, and good studies in the coming year. Money in red envelopes is believed to bring good luck, as red is China's lucky color, so it's called lucky money.

In the past, Chinese people used to stay up all night, but now most stay up only until the midnight firecrackers and fireworks die down.

Chinese people believe that what they do on the first day of the lunar year will affect their luck during that year.

On the first day of New Year, Chinese people put on new clothes, and say "gongxi" (恭喜/gong-sshee/literally ‘respectful joy’, meaning ‘greetings’ or ‘best wishes’), wishing each other good luck and happiness in the New Year. It is customary for the younger generation to visit their elders, and wish them health and longevity.

The data relating to real estate on this website comes in part from the MLS® Reciprocity program of either the Real Estate Board of Greater Vancouver (REBGV), the Fraser Valley Real Estate Board (FVREB) or the Chilliwack and District Real Estate Board (CADREB). Real estate listings held by participating real estate firms are marked with the MLS® logo and detailed information about the listing includes the name of the listing agent. This representation is based in whole or part on data generated by either the REBGV, the FVREB or the CADREB which assumes no responsibility for its accuracy. The materials contained on this page may not be reproduced without the express written consent of either the REBGV, the FVREB or the CADREB.